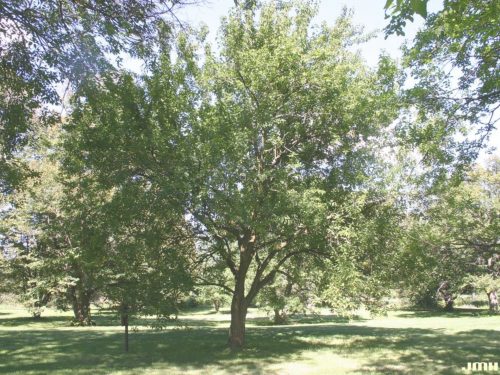 Also called “horse apple,” “hedge apple,” and “bowdark,” this tree is native to Oklahoma and is distinguished by the large green-to-yellow multifruits that often surround it, uneaten, on the ground. 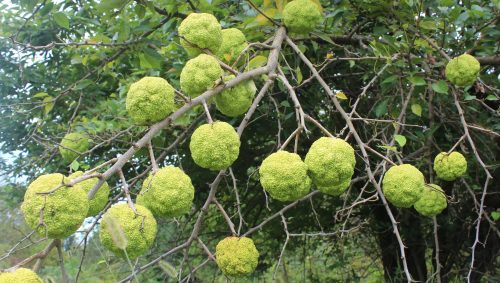 Osage orange trees were prized by some native Americans for their heavy, durable, and flexible wood which was commonly used to make bows. The name “bowdark” probably came from the French name for these trees: bois d’arc (bow-wood). Hobbyists still seek out good pieces of osage orange to make traditional bows.

Early settlers used these trees to make fences. If you plant and then trim the trees in the right way, they will send up a dense array of shoots from their roots. These shoots will quickly grow and intertwine to make a sturdy hedge so dense that larger animals cannot get through. This was a common method of “fence making” until barbed wire came along in the late 1800s.

Who eats the fruit? The multifruits of the osage orange are bit of a mystery because they go uneaten for the most part. Squirrels and deer will sometimes extract and eat the seeds inside the fruit, but nobody seems to like the bitter milky pulp of the osage orange. So why do these trees typically product large numbers of these bulky multifruits each year if no animals eat them and transport the seeds? We think this is an example of “the ghost of evolution past.” There may have been a large herbivore that once had a taste for the fruit of the osage orange, but if so, it went extinct before anyone was around to document it. So maybe these trees had a partnership with something like giant ground sloths, mammoths, or mastodons